The trouble with complications is that once you have these squeezed into a watch, there are usually two distinct problems.  The first is Size and the second is user friendliness.  Regarding the first problem – often the watch is physically just too big, the lug to lug distance resulting in overhanging the average wrist so much that it simply doesn’t fit the average wrist at all.  An excessive diameter measurement even though large, might be acceptable, but coupled it with a large Height or thickness, the entire watch becomes unwieldy and looks pretty silly if we’re being honest.

The second problem of User friendliness or ease of use is another matter and a direct result of the added complications factor.  How does the Manufacturer enable all these extra functions without having more buttons, pushers and so on and expect the user to remember what on earth to do, to action a particular function.  Do the instructions make sense, easy to follow and above all are they intuitive?

A for instance is this Casio GA-1000- 1AEF model that has a respectable functionality with analog hands showing the time, plus a digital set up that also can show the time (not linked) and also a Timer, Chronograph, Alarms, World Time, Thermometer and a Digital Compass for good measure.  It now becomes complicated and it doesn’t have Solar which is a pity as the Solar function doesn’t require any input from the user at all!
It has 4 pushers plus a large Compass pusher too but no crown.  To adjust the analog time takes a fair old bit of push buttoning (is there such a phrase?)and digital sequence of events and to get both digital time and analog time to agree is even trickier.  And you might well have left the instructions at home – silly boy!
Casio has however made compass calibration simpler? than usual, by using the 180º method, which means you only turn the watch 180º and the watch does the calibration automatically – sort of . . . . . and no I don’t understand it either! and I still need the instructions to remember how to manage it . . .

One other thing to say about this watch – for a twin sensor model it is a brute and just far too big!

Many models today maybe digital only and any and all adjustments are managed by a sequence of pushers and buttons and a good user memory.  Add in an analogue function or two as in ana/digi models and there are more choices perhaps for the introduction of Crown usage – or not – in the case of some Radio Controlled models.  With these why have a crown at all as the time should always be correct via the Radio Signals?
There are some models however that have thankfully decided that even with Radio Control functionality, maybe a Crown is a darned good idea.  It’s another and importantly a familiar control that users could certainly appreciate.

The trouble was I wanted a model with a Digital Compass.  Don’t ask why – I just did, perhaps the geek in me and funnily enough apart from making the watch very large the Compass is the easiest thing to work on the Casio GW1000 watch.  Simply push the big button and Bob’s yer uncle!  And I like the watch, but surely I thought there must be an alternative?  Something sleeker, more user friendly and without frequent referral to that darned instruction booklet.

I introduce the EQW-A1200B-1AJF from Casio – and note this is a Japan domestic model and on the face of it – it looks a nice smooth watch.  Doesn’t even look complicated.  But it is . . .

This model has not only the same functionality as my previous watch, but has additional ones, such as Radio Control and Solar Power.  That means it’s always correct time wise and you forget about batteries.  And yes this model also has a Digital Compass which is only noticeable because it says so on the dial!  This is something I wasn’t expecting – a rather understated refinement and an almost elegant watch from Casio.  Isn’t that nice . . . .
The watch dimensions are also rather good at 44.5mm diameter, a commendable lug to lug of just 52mm (I think my “G” shock above is something like 58mm) and a very slim and compact 12.8mm height.  So very wearable for anybody – and about time I’d say!

The dimensions are very encouraging indeed, so it appears the Size issue has been resolved here.  What about the second issue – User friendliness.
Important especially when you consider this model has not less but more complications than my big Casio – have they addressed this too? 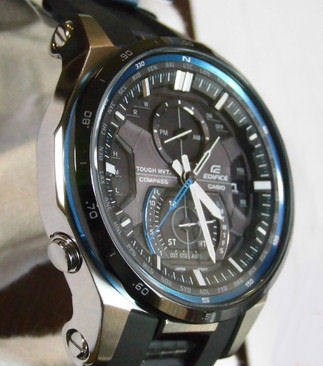 Slim model at only 12.8mm height – with a compass!

Well things are looking good as this model doesn’t have a digital display and does have a Crown and that to me is a very good sign.  Note too that it’s got just 3 pushers plus the Crown – so how will Casio manage with what appears to be less?
Well they manage very well with the Module 5325 as it happens and I give a quick run down on the different aspects of control with this model –

1) World Time and setting your own Home Time – this is as about as easy as it gets.  Unscrew the Crown, then pull out the Crown.  The Second hand will move and point to the City code the watch has been set to previously.  Simply turn the Crown to move the Second hand around the city codes to the one you wish to set.  Then push the Crown in – the hour and minute hands, perhaps the date and 24hr hands will move to reflect the time of that city.  If OK screw the Crown back in – Job done!  You can also swap Home and World cities and that’s easy too.

2) The lower dial – shows the mode the watch is set to – such as Timekeeping, World Time, Stopwatch, Countdown Timer, or Alarm.  And note the same dial on Timekeeping points to the Day of the week.  And also note that push button [C] (lower left) is the mode selector control so each press will cycle through the available modes.  Note this dial also shows Receiving state and battery state too.

3) The Digital Compass – couldn’t be simpler as it has it’s own control at [A] push button (the buttons are lettered clockwise from [A] upper right).  Unlike the digital display Casio GA1000 model this watch does not display any digital angular degrees.  It is just like a standard North indicating compass.  The bezel is fixed but does have some (sparse I’d have to say) degree markings on the inner blued ring which may be useful.  So turning the watch around with Compass mode activated so that the North pointer lines up with the N on the bezel, then checking the bezel against your direction of travel and you’ve got some idea where you’re going.  To use practically, I suppose the tried and tested “sit it on a map” alignment procedure is about as good as you’d get.

4) The Timer – this is up to 60 minutes only.  Again use button [C] to select TR (Timer) on the lower dial.  Unlock the Crown by screwing it out, then pull out and turn to set the Timer duration.  In this operation the Minute hand will be the pointer – set it at 12 for 60 minutes and clockwise to any other time less than that.  Press [A] to start.  An Alarm will sound for 10 seconds on completion and button [B] will reset.

A similar idea for the Chronograph operation, select via [C] and [A] to start and [B] to reset and so on – you’ll soon get the hang of it.  And the Alarm is more of the same and here you can see the value of this Crown and in use a pattern is quickly established that you can remember – Select with [C]- set with the Crown – start with [A] and reset with [B].

It all reminds me so much of my older Citizen analog Radio Controlled, Solar and World Timer model, which used the crown in exactly the same way, though a simpler and less complicated model of course.  I love it and wear it often and I can see the same thing happening here even with all these complications.

Other features are a very good night “Neobrite” illumination on hands and indices, good Water Resistance at 10BAR or 100m, Date, Day and Time continuous indication (always a good thing), a fully automatic Calendar to 2099, light weight steel and aluminum case & bezel resulting in a weight of only only 92gms.

I’d say Casio might have just about got it perfect this time – though as always until you have it on your wrist for a week or so – you never know!