I suppose “moving on” is about as good way to describe how Quartz technology has transformed watches of today from when I started collecting.  I also belies just how fast this movement was and still is.  I well remember a great quartz model I bought a considerable number of years ago that I thought was about as good as it got. 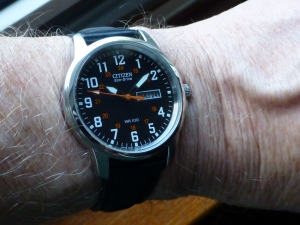 which featured a more or less conventional set up, but sported Solar Power, a Day and Date display and great lume visibility in the dark and is still as good as it gets for what it does and amazingly still around in various guises today.  I mean Solar Power simply transformed the thing into another realm.  No more battery issues though not quite set and forget – allowing for the +/-15 secs/month accuracy of course, as the end of month date was still something you had to sort out.  But that aside . . .

That end of month issue was eventually sorted out or bypassed by the introduction of digital displays – the module took care of the date as it was programmed to a date well in the future and probably longer than you would have the watch for.  However as I like the traditional Day and Date window idea, technology today has come to the rescue again and even with mechanical disc Date windows, these can be what they call Perpetual Calendars – or until 2099 or some-such, so good news.  Such as the Citizen AT World Time – image below.

But that said with the introduction of digital displays and the newer hybrids showing both analog and digital displays things really took off.  Just look at Casio, Citizen or Seiko, who between them probably account for the bulk of the watch quartz revolution and how their models have multiplied in sheer technological functionality.  Not only do we now have Solar Power, we can add in World Timers, Chronographs, Alarms, thermometers and now ABC’s or Altimeters, Barometric Pressure, Forecasting and Digital Compasses.

Unfortunately there is always a down side and as I’ve said before, this is usually SIZE – yes to shoehorn all this technology into a watch is difficult and as a consequence watch sizes have got bigger.

Whilst efforts are made with every new model to reduce module and sensor sizes.  This adds another problem because they’re smaller.  What happens can defeat the object.  I can hear them already – “Wow, we can put even more into the watch” and so the watch size is still perhaps larger than ideal.  Couple this with the incredible rise of “tough” watches or in the case of Casio, the “G” shock phenomenon, for that’s what it is.  It is a fact that a quartz watch in a standard stainless steel case is already pretty tough, and be honest, probably tough enough for most of us.  So a cult and fashion thing perhaps, but add this “tough” aspect of a physical case shroud to more functions, more sensors etc. that “tough” protection swells the watch size again and perhaps out of proportion.

So we saw the rise of super tough models which were and are “macho” perhaps, but also were the models featuring all this “boys own” technology – and let’s face it, no matter how much fun, much of it is superfluous.

So it’s refreshing to see the same Watch Brands addressing that issue in another way.  Here they’ve taken much of this new technology and started incorporating it into more traditional looking watches.  And without tough case shrouds the watch sizes reduced from diameters of 50mm+ back to 40’s and importantly slimmer too from 16mm down to 12mm or 13mm.  It proved if nothing else that it was “Shock” watches that were and still the main culprit for the rise in watch sizes, and not actually the technology.

Which brings me to my latest model from Casio – The Casio Edifice EQW1200B-1AJF.

It’s a conventional looking model with Solar Power, 44.5mm diameter and just 12.8mm height.  It has World Time, Chronograph, Timers and Alarms plus a perpetual Calendar (till 2099) with a conventional style Date window and a Digital Compass, which is also relatively slim and sleek and for what it contains, definitely understated (similar crown control to the Citizen AT).

For more detail on the Edifice EQW model – see Part (2) next post.

And here I think at last our Watch technology is finally fitting into it’s rightful place.  A bit like the old Computers that used to fill an entire room and now you carry in your hand! 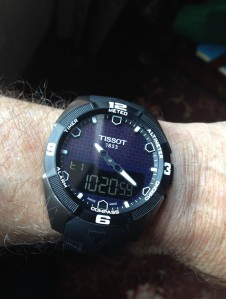 Here’s another non Shock but though not quite a conventional watch – the Tissot “Touch” Solar.  Perhaps the ultimate ABC classic at the moment which has a similar functions but operationally unique, with Digital Compass, Barometric Pressure, Altitudes and weather forecasting, Chronograph, Timers, Alarms, Dual/Swap Local Time (what I call practical World Time – so many are a catalog of city codes) etc. – great luminous properties and night light and all in a very plain dial background.  And that’s it’s particular secret – that dial is virtually empty and only shows what is selected and even the digital display hides away when not required.  Once again an understatement if there ever was and yet hiding an amazing range of functionality.

How much of all this stuff you would find useful is anyone’s guess and we’re all different of course, so for some a must have and for others – well like me.  However I love the EQW Edifice here simply as it is so understated and the quite unexpected bonus of the Digital compass?

Well I was a boy once and it just appeals . . . but importantly the core value functions are all there too and it doesn’t look like science fiction at all – but of course it is . . . it really is! 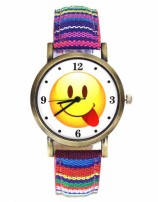 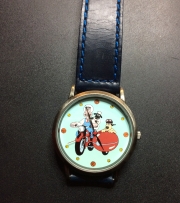 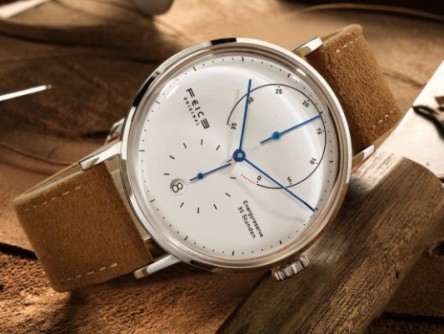 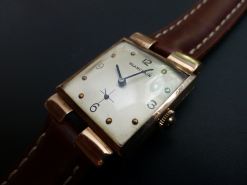