Seems to me that the name Casio has been around for years and especially as I used to travel the world from the Near East to the Far East, from Europe to the Americas and Casio was just – there.  My first calculator was of course Casio and I think I also had a tiny musical keyboard, also Casio and indeed all my friends have something made by Casio too.  And yet we’re really only talking of back to the 1970’s probably, which is not that long ago, but certainly was the marvelous and wonderful years for the explosion of “people” electronics.  With the emergence of LED and LCD and miniaturization of electronic components, suddenly as if from nowhere – Casio was born.  Established as a Company way back in 1957 and developing the Casio 14-A compact calculator (an all electric one!), this was just the start.   With their (1960) new manufacturing Company in Tokyo, followed by a European facility in Zurich in 1967 the Casio Company was up and running. . . .fast!

They made and still make a dizzying array of products from Electronic Dictionary’s to Calculators (of course), to Cash Registers to Labelling machines.  Musical Instruments to Projectors to Cell Phones and Digital Cameras.  In fact if it was small, consumer attractive, then Casio probably made it.

Then in November 1974 they came out with an amazing watch product – The CASIOTRON – an electronic watch with complications.  And it had to have something different as the Japanese watch making industry was virtually a “closed shop” and quality and price was the name of the game.  So Casio produced something that bit different.  Not only did this watch show hours and minutes and seconds, but a 10 second continuous counter plus the month and the day, but also had a unique function that could automatically determine the number of days in a month – an “automatic” calendar.  It had an easily visible Liquid Crystal Display that was simply sensational at that time.

I’m almost sure I got that first model too, but it’s so long ago now I can’t remember!  I certainly had quite a number of Casio models over the years though and when one “died” I tended to get another.  Mostly the older prototype displays gave up the ghost eventually, but as with everything Casio did, they improved on it next time round!  Their motto of “creativity and contribution” is not a bad goal and one that still drives the company today.

As said, the range of watches is truly exceptional and a simple click on Google will find hundreds of examples, though here I show just some of the milestones of this interesting Company.

In 1983, Casio released a new watch that overturned the normal ideas of the watch and clock industry.  Bucking the trend this rugged design of the G-SHOCK was based on a unique concept of a really tough watch that could be dropped from the top of a building and still not break.  It really took off in the USA as this idea definitely appealed the the guy in the street.

It had quite a few features such as the high contrast crystal display, stopwatch, timer, auto-calendar and so on, but all in this rugged high performance urethane cased body, which totally protected the inner movement 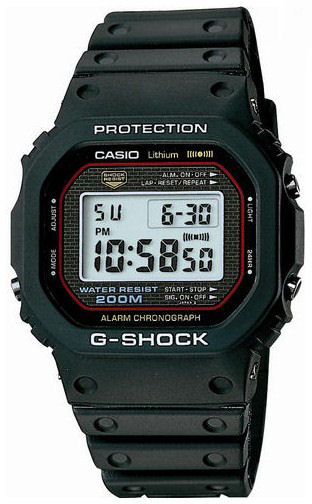 Just a year later in March 1985 another innovation which was based on the novel idea of making the watch and plastic wristband all one piece, was the PELA FS-10.  Here Casio used a new hybrid moulding technology which applied plastic moulding and microelectronics expertise.   This was amazingly thin at only 3.9 millimeters and very light at 12 grams and it was an immediate success and became the watch industry’s first million-selling model.

I can’t ever remember seeing one of those at the time, but this image shows that it was a very sleek affair.  I particularly like the “drivers” style slanted display so when driving the car you can easily see the time (assuming you’re a left wrist watch wearer of course).  The integrated plastic strap really suits it very well and what’s interesting for me is the quite different look of this model compared to the G-Shock – a different market I would think and yet produced with the same flair – that’s Casio for you.  It also shows the Company vision and producing watches for all tastes.

After entering the business of timepieces in 1974, Casio released watches with various advanced features, including a calculator function (C-80 released in 1980), and a dictionary function (T-1500 Walking Dictionary released in 1982).  The company obviously decided that the wrist could be host to not only a timekeeper but also a sort of computer on the wrist and in 1984 out came the Databank Telememo 10 (CD-40).  This again took the watch world by storm selling over 6 million of them in the next 5 years.  It had all the now recognizable Casio watch functions, but added a databank function that could save and recall 10 groups of 16 letters or numerals, which simply did away for the need to carry a personal phone-number organizer or diary in the pocket.  So much easier on the wrist.

Quite a few of the models now appearing were including functions that were simply not seen on watches before, such as in February 1989 when the BM-100WJ or “Weather Predictor” appeared.  Note what I call the Casio “look” starting to appear, which is still very common today.  This model I suppose was the original Pro-trek style watch of today, with the introduction of features that those out on the trails might want one day.

It should also not be forgotten that Casio don’t just make digital watches, but analogue features more often than realized – just look at today’s models and you see quite a swing towards dual display – that is Ana-Digi and some of the current range are, disappointingly for me, very much bigger than the old ones.  Perhaps in part due to the heavy complication factor of all those extra “handy” functions – a bit “Swiss Army Pocket Knife” perhaps.  I do remember seeing a “Swiss Army knife” that was so big and swollen with gadgets, it was hardly “pocketable” any more!

And the ladies are not to left out either as Casio have always had a range of ladies watches – some smaller versions of gents models such as the “Baby-G” which replicate all the features of the standard G-Shock series, and also some non digitalal display models such as the “Sheen” series, pictured below.  In fact that ladies Sheen model shown here is a very smart watch with really decent high tech features, ceramic bezel, sapphire crystal and a Sun and Moon indicator, date window and so on – not a poor relation by any means.

In June 1999 things really started to move with the introduction of  the SATELLITE NAVI, in the Protrek series.  This had almost unheard of advanced features, the main one being to easily determine directions and distances in relation to your location or destination.  This was now becoming a real asset for those involved in outdoor activities such as climbing or fishing, where lightweight compact devices come into their own in comparison with more cumbersome equipment.

I show the first and second generation of these in the following images. 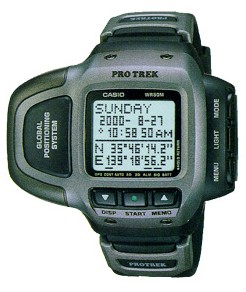 Radio controlled watches soon followed and in 2001 the WVA-300 was the world’s first radio-controlled watch that indicated accurate time by receiving standard time radio signals, and also powered by a solar cell.

The watch took the watch industry by surprise as it was believed that it simply wasn’t possible to build an advanced-function watch using solar cells.

It featured a very low power consumption and miniaturization using very advanced developments such as an energy-saving CPU based on a SOI (silicon on insulator) format, and a super-miniature detection IC.  An advance perhaps gleaned from their camera technology, which of course was going on apace at another division within the Casio empire.  Not surprising it’s said if you buy a watch or a camera today, then it’s probably out of date by the end of the week!  Such is the pace of modern micro-electronics.

So we’re just about up to date with this highly innovative Company, Casio and I attach a few images of some other models that are around.  I would certainly give them a look maybe in more depth than many do, as they have an awful lot of variety out there.  One thing I am certain of however is that once you’ve seen a Casio – I assure you, you have NOT seen them all! 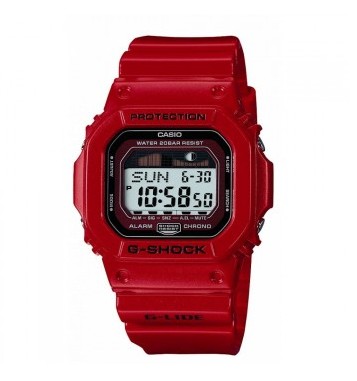 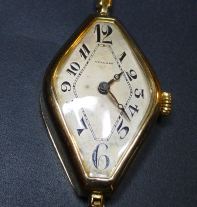