Yesterday was a busy day here in the UK as any watch collector might tell you.  It was – put the clock back day! – Where BST or British Summer Time ( Summer has to be a joke right?) officially ended on Sunday morning at 2am.  So a good part of the day was setting the quartz clocks and watches and one or two mechanical watches that I wear through the week.  Now trying to remember how all these different movements like to be changed can sometimes be a bit of a challenge.  Especially on some of the Moonphase or Complication movements, where you definitely end up rummaging around for either the instructions or those “notes” you took all those years ago.

Anyway it was during this “changing the clock” business that I came across my lovely and elegant Dugena Triple Date Calendar Moonphase.  And OK I’ve posted much of this information in a previous post, way back in March 2009, but I felt I had to feature it again and as I thought I’d have trouble setting it, I might have to feature an instructional post.

But no as fortunately I didn’t get round to altering the time until today.  Could be a problem I thought as it also had not been worn for a few months and the date was out by some margin (I think it was at the 25th) plus the moon was nowhere in sight!  BUT I say fortunate – as today is a full moon and this is SO useful when adjusting a Moonphase watch.

So all I had to do was change the Moonphase to the top position and that was it really, then alter the date as the Day and the Month were still OK.  I remember that this Dugena uses the Miyota 6P80 movement and as with quite a few of this series you have to be careful as to when you set anything.  For example the Date can change anywhere between midnight and about 5.30am and can’t set the Date between 9pm and midnight and as for the month – well you can’t set it between the 26th and the 31st, or certainly not the quick set feature.  So a tricky watch usually to remember what you’re doing, but fortunately this time not only did I have the original instruction booklet, but it was also a Full Moon – so easy!

Anyway at 10:30am this morning I pulled the crown out to the 1st position and clockwise turned the Moon to the top position, then in the same crown position turned it anti-clockwise to set the date pointer to the 29th.  Pulling the crown out further to the 2nd position adjusted the hour and that was it!  I didn’t set everything with the second hand at 12 however, as I simply don’t need to be that accurate.  One of the side effects I think of now owning a One Hand watch (a very recent acquisition) which I hope to review in a future post. 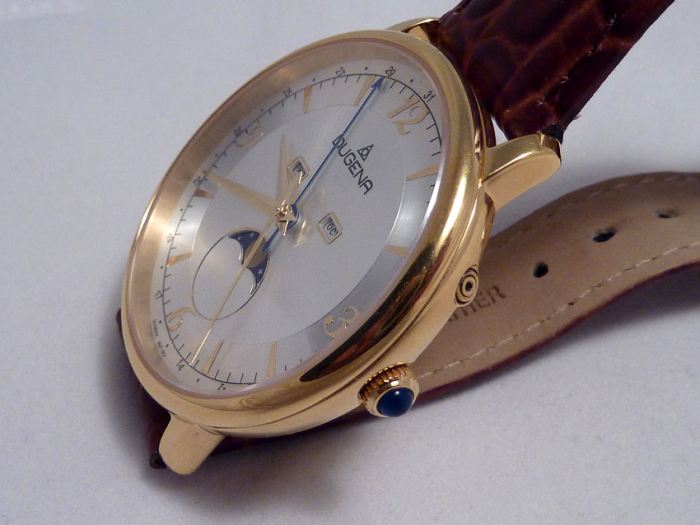 For those unfamiliar with the name “Dugena” I repeat my old post information here – The watch Brand of DUGENA has its origin in the Union Horlogre, a coalition of Swiss watchmakers in 1900.  Some 17 years later watch manufacturers Biel-Genf and Glashuette joined to form the Vereinigten Glashuette ALPINA, which quickly started producing in Germany under the name of “Alpina Deutsche Uhrmachergenossenschaft”.

In 1942 Berlin, Alpina was finally changed to DUGENA, and since then the triangle-in-circle logo has stood for watch manufacture of the highest standard in Germany.

I note that looking at the various Dugena models available today, whilst there are some very smart watches there, none appear to match the sheer elegance of this model with it’s sleek and rounded case and Moonphase.  Such a real pity as it is a really beautiful watch and one of my very favourite Quartz dress watches.

When I first started collecting I wanted a watch that was absolutely accurate and to the second – so a Radio Controlled one it had to be, then I got the mechanical bug and accuracy went out the window (well almost) and now I’m “estimating” with One Handed watches. 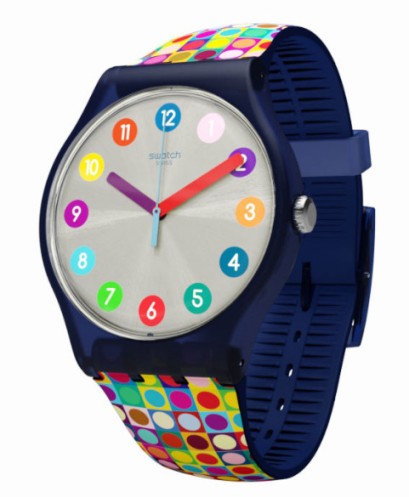