A King in silver

Previously posted in the “under the spotlight” tab – but as a few folks told me they never noticed that tab before I’ve removed it – so instead I’ve moved this article and listed it here as a new Post instead.  Another silver watch from my collection –  the Roy King Classic Watch. 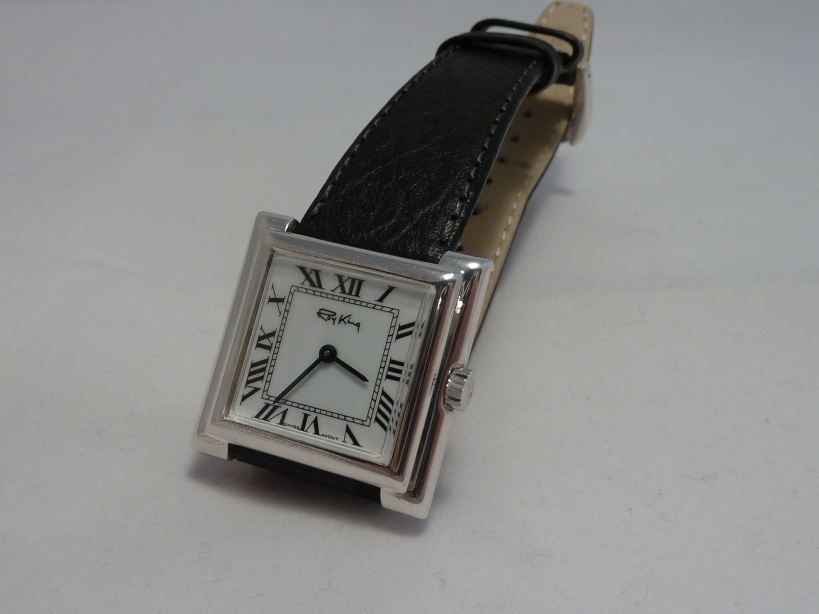 A relatively late solid Sterling silver Roy king square watch dated 1997 with the classic white enamel dial and Roman numerals in black.  Black stick hour and minute hand, the Roy King signature and Swiss Movement complete the face details.  Clearly seen under the heavy, flat 1mm thick solid crystal.
A solid silver double fluted profile one piece case and signed crown give that retro Art Deco style favored by many of the rich and famous, many of whom sported an RK on their collective wrists over the years.  This one had a relatively poor black strap which I replaced with a rather better quality black camel leather 18mm strap – unfortunately not an original King but I retained the King solid silver buckle. 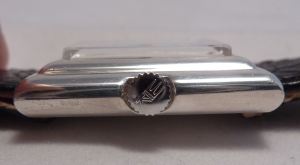 The dimensions are 28mm square excluding the crown and just 7.4mm height make this a neat watch indeed.

The movement is a Swiss hand wound mechanical one and though unconfirmed is possibly from Beuche Girod as he had a working relationship with this Company in that he sourced movements from them, hence the “Swiss Mov’t” signed at the foot of the dial face.
I say unconfirmed as it’s difficult to be absolutely certain as to the movement of course as to get at it requires the removal of that substantial chunk of glass at the front of the watch.  The case is as stated a solid lump of Sterling Silver and no back access at all, so I’ll reserve full judgment as to the true identity of it until such time as it goes wrong….. and that could be a long, long way off. . .

A bit of a collectors item these days as these are no longer manufactured and becoming more difficult to find in really pristine condition.

So who was Roy King?  I can do no better than attach an article from one of the National newspapers from November 2000 on his death – as follows –

ROY KING, who has died aged 87, was a leading British watch designer and jeweller, with customers ranging from Saudi princes to The Beatles and Tom Jones.

King began his career at the age of 14 as an apprentice goldsmith and diamond mounter in Hatton Garden. By 21 he was foreman of a workshop, creating one-off pieces which readily found buyers (including members of the Royal Family) through Bond Street jewellers. Much of his work in the 1930s was also as an uncredited manufacturer for names such as Rolex, Cartier, Asprey and Garrard.

After the war, King began to design and make watches under his own name. When restrictions on the import of Swiss watch movements were lifted in 1960, King decided to integrate these into his own designs, recognising that, whoever the manufacturer might be, people still wanted “Swiss Made” moving parts.

He signed an exclusive agency agreement with Bueche-Girod, the Swiss movement makers, which left him free to design the exterior of the pieces as he wished. He also began to make watches with straps made wholly from gold, then a novel idea.

In 1961, the Roy King workshop swept the board at the British Modern Jewellery Exhibition, winning two first prizes, as well as one second and one third prize. The winning pieces are now in the permanent collection of Goldsmiths’ Hall.

During the 1960s, the workshop produced many designs using a variety of unconventional methods. Molten gold would be poured through tea strainers before being stretched into shapes to satisfy the most avant garde tastes. King’s “bark finish” design for bracelets sparked a craze: when George Harrison married Patti Boyd in 1966, she wore one of King’s bark finish wedding bands.

Roy Cecil King was born in Kentish Town, London, on May 6 1913. His unmarried mother handed him as a baby to an elderly foster mother, Mrs Wells, who eventually adopted him. Mr Wells, a road sweeper, died in the great influenza outbreak of 1919 and soon afterwards young Cecil, as he was then called, found himself standing in a walk-in cupboard while his future was discussed in the cramped tenement room where he lived.

At one time, it seemed as if he would have to be taken in by Dr Barnardo’s, and even as a pupil at Haverstock Hill Central School he had to deliver hand-laundered shirts (at 2d a time) to help with household bills. One of his customers managed a large jewellery firm in Hatton Garden, M J Greengross, and in 1927 he was offered an apprenticeship.

On his first day at the bench, King was put next to a consumptive Italian master craftsman and told to learn what he could before the man died. A tubercular cough rendered King’s taskmaster highly impatient, and he would crush with a mallet any work which fell short of perfection. In the evenings, King went to classes at the Sir John Cass Art School, perfecting his skills at diamond mounting. In his spare time he performed in a jazz band as a pianist and comic master of ceremonies.

During the Second World War, King worked as a planning engineer on the production line of the Hurricane, eventually heading up a 100-strong department at De Havilland. There he used machine tool techniques which he would later apply with great success to jewellery and watch manufacture.

He then set up his own workshop in Watford, where he offered “everything from a tiara to a tiepin”. In 1952 he produced five strawberry leaf tiaras for duchesses to wear at the Coronation. At about this time, King began exporting his pieces to offset the effects of the then 100 per cent tax on luxury goods in Britain. He soon began to concentrate on watch manufacture, or, as he described it, “jewellery that tells the time”.

In 1965, King built his own factory near Watford, where he employed 65 staff who made 25,000 gold and silver pieces a year. In 1971, he won a National Export Council Award, and the same year became a Freeman of the City of London. In 1973, he bought the Swiss watch company La Montre Royale de Geneve. The 18-carat gold and platinum range sold under this brand name were among the most luxurious ever produced, with precious stone dials (such as malachite and onyx) which proved very popular in the Middle East.

King celebrated his 60th birthday in 1974 with a one-man show at Goldsmiths’ Hall and the launch of a collection of silver watches. During the 1980s, he opened a showroom in Mayfair. Here he would entertain clients with his extensive repertoire of jazz songs, particularly Cole Porter and George Gershwin. He had his own bench at the shop and until well into his eighties continued to make one-off pieces.

Away from his workshop, King enjoyed tennis and backgammon, and drove a white Rolls-Royce. He lived to see many of his earlier pieces come up for auction at London salerooms, and in 1999 several items by him were included in a “Treasures of the Twentieth Century” exhibition at Goldsmiths’ Hall.

The legacy of Roy King for me as a watch collector is simply this watch – A classic in every way. 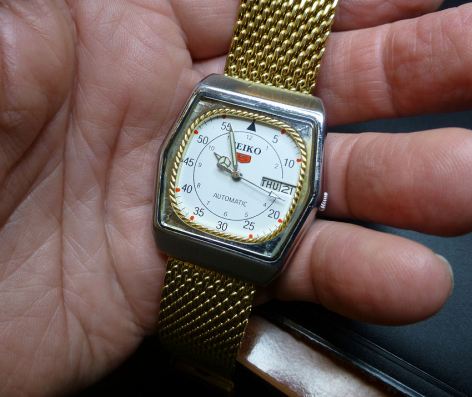 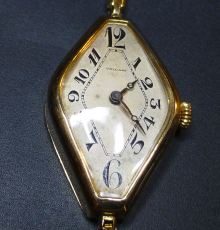 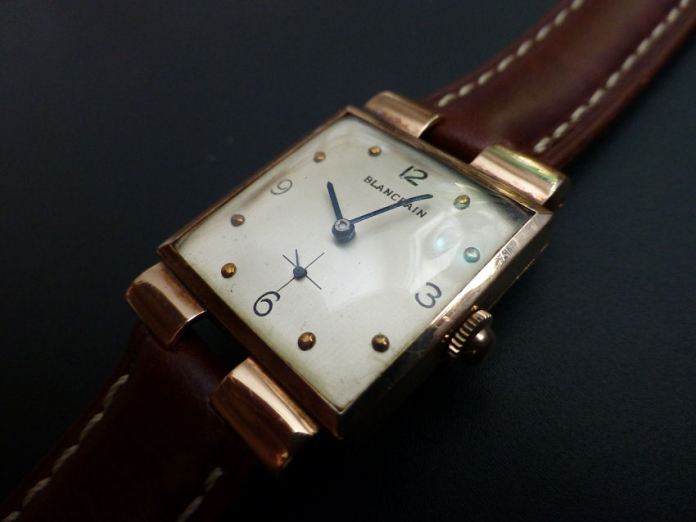