I picked up this Promaster model some time ago, basically as an alternative to my old Seiko Orange Monster and as a mechanical automatic option to my older Citizen Eco-Drive Diver.  However, whatever the good or bad points regarding which power system is used, the most important feature for me is Clarity – ie – is it easy to read?  So, being very happy in that regard, with my “daily beater diver”, the Apeks Diver, I decided to compare them – to see how the Promaster stacked up.

This is the Citizen Promaster Automatic 200m Diver NY0400-17LE in blue.  First thing to say is, it is a superb looking watch.  First thing you notice is the position of the crown, to the 8 o’clock position.  Not quite sure of the logic of this.  I could understand it, if the crown was a pusher, like a stop-watch start button.  Then the right thumb could naturally operate it, assuming the watch was worn on the left wrist.  But this isn’t a pusher – it’s a crown.  In fact it’s a standard screw down, hands, day and date set crown, so the rationale for this position escapes me.  But it looks different and it doesn’t stick into the wrist – (often the excuse for the crown at the 3 or 4 o’clock position) – not that that’s ever been an issue on any watch I’ve owned. 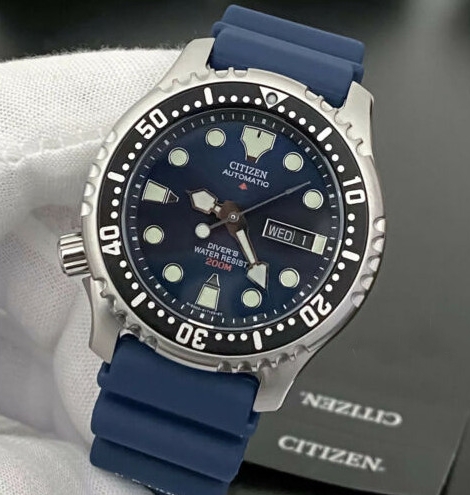 Citizen Mechanical Automatic (no solar, no battery – just you)

Anyway, this model, despite the crown etc. appears to be a solid performer, looks really good, well balanced and very solid and very well made.  It features good large hands/markers and a decent contrast face with a centre seconds under a Hardlex Crystal , heavy well knurled uni-directional, screw down crown and back, 200m Water Resistance and a blue silicon diver’s strap.

But, it does have a few points that I’m not so keen on.

First, of course is that crown position, which seems wrong, for me at least.  Would it suit the left handed? – maybe it does.  But for me, I end up holding the watch upside down to adjust anything.  Which is awkward.  Case-wise, it looks great, really well constructed and finished to a high standard as you’d expect from Citizen. 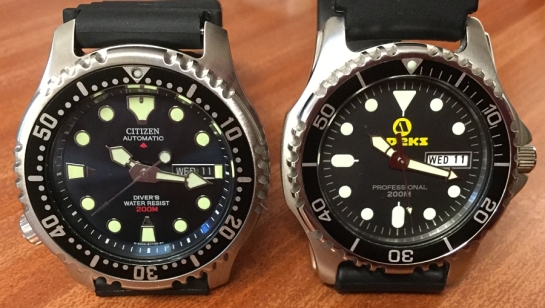 The dial, appears more heavily recessed in compared to the Apeks (though in fact it isn’t) and shows dark under normal light.  And yes, I know the sales picture seems fine (above).
But the actual photo image here on my desk, shows different – in most lights we have some dial shadow.  This is caused by the inner seconds ring sloping up against the dial wall, whereas the Apeks ring (also black) is flat on the dial itself, then with a reflective side wall as it were, which supports the crystal.  In daylight, the Apeks is simply clearer.

The dial background of the Citizen on the left is also reminiscent of a solar cell, which it isn’t, but has some patterning.  If you turn the watch to the light, you see the setting “sun glare” reflection from centre to edge – the image doesn’t show it too clearly here, though if you look carefully you can just see the “sun across the sea flare” between the 9 and 10, spreading out from the centre.  In some lighting, it is very noticeable which can make the watch tricky to read quickly.

If I now look at the markers, the Citizen has metalised edges, which is OK in the dark as it doesn’t affect the luminousity (which is brilliant), but in daylight, these being reflective, definitely hinder legibility.  I much prefer the matt contrast markers, without any edges.  Perhaps over embellishment.

And finally, the Citizen Day and Date window uses a rather thin white font against a black background – when it’s an optical fact, this combination is not as easy to read as black on white!

And the final point for me and nothing to do with reading the time – is the strap.  The Citizen original blue one, has the “waves” on both sides and OK I accept it’s supposed to be a Diver’s watch and us designed to grip a wet suit.

But, let’s face it, most of these models are targeted at the recreational user and not strictly for professional diving – the active holidays customers.  So, as a recreational user myself, it’s not as comfortable as the Apeks, which has allowed for this with flattened waves on the inner surface against the wrist.  Seems ironic to me, as the Apeks (a Diving Company) actually do make watches for professional divers.
Note – In the second image showing both watches, I have changed the Citizen strap for a black cut down Apeks and for me it’s now much better for comfort and indeed proportion.
Of course I’m just doing what many Divers do when using a watch of this type – they modify them to suit their purposes, but as always and don’t get me wrong – it’s still a lovely watch, but for me, personally it’s not my ultimate choice.

What this does show, though is that whichever power sourced watch you prefer and have decided to get, it is often really quite difficult to tick all the boxes in one model.  You invariably have to compromise, which is just how it is.

And what about Eco or Auto? – and maybe the true reason for my Post.

Quartz battery, Eco-Drive solar, hybrid Kinetic and so on, despite being modern technological ideas, in comparison to the old bumper mechanical “self wind” technology, actually seem somewhat lacking in practical terms.  Maybe a case of technology for technology’s sake?

And in fact, the one redeeming and great feature about this Citizen and the real reason for buying it, is the sensible, tough and solid performance of the Mechanical Automatic movement, which at the end of the day is VERY difficult to beat!

No reliance on electronics (modules, step motors and the like) no outside influences required, no chargers or batteries!  All it needs basically is – YOU!

Simply take it out of the drawer, shake it a couple of times, stick it on your wrist and you’re in business – period.  You can wear it in the day time or at night, nice luminous hands and markers means you can actually read the thing at any time.  If it has good water resistance, then don’t worry about water and don’t worry about a few knocks, as in the case of the Diver or Recreational model – these are very well built.

It has to be said again – that fact that only “outside” or “exterior” energy source required – is you.  Just you.  Isn’t that ridiculously clever?

In fact, to be honest, I have many Automatics in my collection and have display cases full of them, vintage automatics going back many more years than I care to remember – and every darned one of them works almost instantly, as you pick them up.  Sometimes many years after their last use.  As I say – difficult to beat!

So, nothing new, I hear you say and whilst I agree – it is factually surprisingly, that the old self-winding mechanical Automatic is often quite unknown among the young of today.

They are so in tune with iPhones and iPads and Android this and that – and all being accepted, would you believe, with pathetic battery life.  Of course this is the new world of easy power on tap, instant communications and availability of knowledge and the all pervading Internet and so on – but all of it, however, requiring external power sourcing. . . . and maybe frightening too in this world of AI, not actually reliant on you – at all . . . . and that seems a little scary?

And what happens when the power is not there?  Cyber attacks, Internet service denials, Nuclear pulse effects and goodness knows what else.

Doesn’t bear thinking about? and kids, and most youngsters today don’t – think about it – at all!

Anyway, enough of my little rant – I’m not going to go into that subject anymore, except in the context of watches.  Independent power, or energy produced by my wrist movement seems an idea that will continue, I hope, for a long, long  time yet.  Maybe we should power other devices from the wrist or legs – true kinetics perhaps.  Not charging batteries or accumulators though – as for me, these are a fundamental weakness in comparison to what can be almost friction less mechanical devices.

Anyway, back to my nice Citizen Day AND Date Diver – It’s a Mechanical Automatic – did I mention that?  It features the Calibre 8203 Japan movement to be precise and it’s a nice 40mm diameter, so not a large watch.  It’s 200m rated, so fine for scuba diving or swimming and most other recreational water activities.

So, just another Diver style watch?  Well maybe so, but this is a mechanical Automatic and it works for you and because of you – 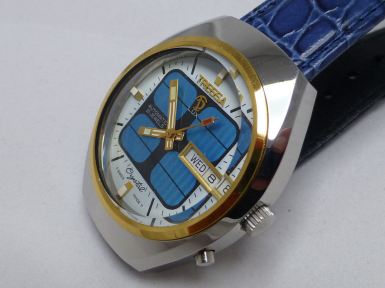 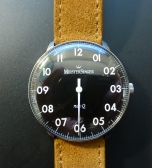 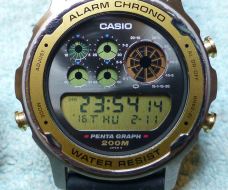 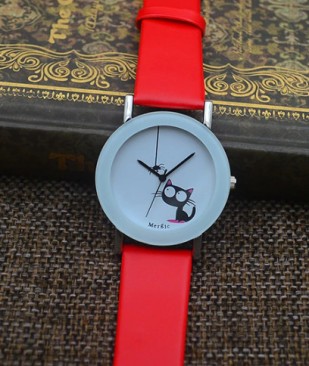