There’s something about the classic “slide rule” and “Hawk” style Citizen watch that brings out the pilot (hangar) in me.  The Navihawk was first produced nearly 25 years ago and publicly available since 1993 and is still going today with many different variants.

The inclusion of the slide-rule element around the dial was a touch of genius, even if only used by a tiny fraction of buyers.  It was rather the “look” of this model that gained such a popularity then and now, that has managed to keep it looking as good today as the day it first appeared.

This example is the red Arrows AT World Timer, where the slide-rule has been replaced with the possibly more relevant World Time indication within the dial.

This is in keeping with the new models, where the data displayed now is located IN the dial and not around the bezel, as the originals. Basically this model is a Chronograph with analog date (no digital windows here), Eco Drive Solar movement.

This model is positioned at an affordable price point (£200 ish) for most folks and is a great “wearing” watch – in other words – it looks brilliant on the wrist.

However certain versions can reach much higher prices, such as the Limited Edition Skyhawk A-T model shown here – at around £1200.  Note this model includes digital displays, which here are used for the World Time feature with and the inner dial bezels for the rotating slide-rule data. 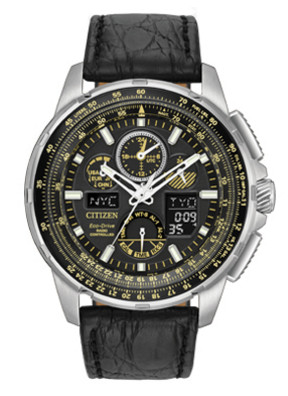 The overall Hawk series look is self evident and as such can be recognized the world over as a Citizen.

There are as I say, many variations of these (I have 2 myself) and they always impress when worn and whilst they are dial “heavy”, Citizen have somehow managed to allow maximum clarity without much clutter, which is a trick few Brands can match.  It’s fair to say they’ve managed to create a “cult” following, a market if you will where there may well not have been before – indeed a marketing triumph.

And when it comes to the slide rule data.  I wonder how many customers actually have a clue as to how it works, let alone use it?  Maybe we’re all “hangar” pilots at heart, Biggles or Dan Dares (that’s showing my age!) – but who cares if all you manage is to tell the time. 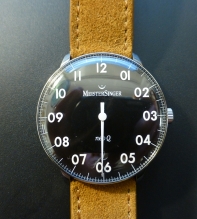 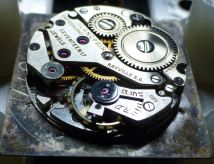 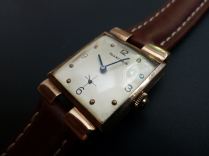