I suppose it’s difficult for a watch company to keep introducing and improving models, especially as some of them are considered classics now and so it is with the Citizen Promaster Navihawk.  This is a model I’ve always liked and admired.   A true analog digital combi watch that became a classic was as easy to use as it was to read, despite the complications and all contained in a compact case –  I wonder if this is still true today . . . .

My Navihawk on the right beside my Attesa and Breitling!

Well mostly not true I have to say and in too many cases, though there ARE some model versions that still have that classic Navihawk, Skyhawk look that are not too big, as this seems to be the way of things these days.   So many models are really too large in my opinion and often unfortunately coupled with to much confusing “dial clutter” in that they are quite difficult to read.  It is a fact that in the human brain and optical system there is a  correlation between seeing, understanding, computing and reacting that is both remarkably fast and intuitive.   A pilot for example has to be able to glance at his instruments and immediately absorb the data and act accordingly.   With some of these watch models, that first glance would simply not pick up the data required without some deliberate scrutiny – and even then can be tricky.

The Navihawk A-T Classic  JY8035-04E is one that perhaps is already in that grey area of confusing presentation and is one I wouldn’t want to own for that very reason.   To much stuff in the dial coupled with smaller digital “negative” displays – surely not the best idea!   It’s also 48mm wide which is close to the limits, especially when you consider my old model in the image here is only 41mm diameter and not much more lug to lug.

Fortunately though there are many versions around as I say and it seems I can still pick up a Hawk version that will just about satisfy my requirements.   However I do accept that some of the newer models have added functionality in comparison to my old Navihawk, such as Radio Control and Eco-Drive and may through necessity perhaps be slightly larger, but they have to be within reason. 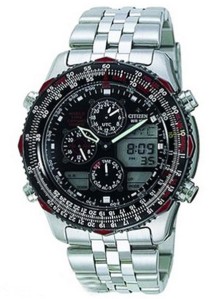 The Navihawk JN0004-51E is about the closest to my old model and with the same specification – that is no Radio Control and not Eco-Drive, but everything else and even the dimensions are very similar.   However not much point in getting one as it’s more or less the same – however it IS nice to see that it is still available which does show it’s class.

More adventurous is the AT8020-03L Blue Angels model (2013 I think) which is updated in respect of having Radio Control and Eco-Drive but surprisingly only fractionally larger than my old model at 43mm x 12.3mm and importantly only 49.2mm lug to lug.    The arrangement of the sub dials fortunately is such that the “aircraft instrument” surrounds don’t muddle the data, which they can do with more than 2 x sub dials, so from a clutter point of view, whilst just about on the limit is in reality just about OK (not great but OK).   In fact this is a really nice model and some thought has definitely gone into this, certainly with the multi function retro sub dial @6 which also shows the Day of the Week on it’s right side and the Radio Signal data on the left. Note no digital display on this model, yet the analog presentation manages pretty well, albeit at the clutter limit.

This model also rises above the usual with it’s subtle blue/yellow color combination – the ion plated bezel for instance has a yellow sunk edge which matches both the dial pointers and the back of the strap.   The strap incidentally is 23mm, a little unusual will be tricky to replace when it’s time comes.

My last and rather attractive models is the Promaster Titanium JY8000-50E which is a little way off the traditional Navihawk look and more like my Attesa, which I got some years ago when it first came out via Seiya in Japan.  Function wise it has everything and great clarity too even using the same dial format, though with cleaner dial surrounds and broad hour and minute hands – it is a class act (47mm x 14mm) – BUT this is not what I’m looking for here and my Attesa is too similar to even consider.

So my quest for an upgrade to my old Navihawk has to be the blue strap AT8020-03L Blue Angels which is daily beater material all day long – so I’ll be looking for one I’m sure.  Though the rotating calculation bezel is something of an extravagance as I can’t think when I last used one of those – but what the heck!